As CSUSB celebrates their 40th anniversary, this article looks at the universities’ past and offers insights into the future growth and impact on the community at large. James Watson of J. R. Watson & Associates Development Corporation and others offer their perspective. 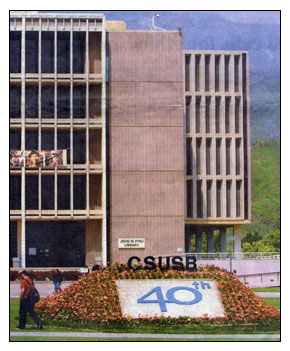 A Student walks past a display announcing the 40th anniversary of Cal State San Bernardino on Friday. The university is one of the fastest growing public universities in the state.
Gabriel Acosta / Staff

Cal State San Bernardino celebrates a big anniversary this evening, at a gala that will honor big donors and include presentations about the university’s past and future.

Much has changed in four decades. Cal State .San Bernardino opened the 1965 school year with 293 students and 30 faculty members, according to university figures.

Today’s celebration, though, will not just high-light where Cal State San Bernardino began and where it is now, but also where it goes from here.

The campus remains one of the fastest-growing public universities in the state. It also is headed by a president, Albert Karnig, intent on taking the university to the next level on the national stage.

Karnig, who took the helm in 1997, said Cal State San Bernardino is “exquisitely positioned” to do so.

The university should hit 25,000 students in another decade, Karnig said, and it is laying way for three new buildings.

Education opportunities are also expanding. The university will offer its first engineering
program beginning in the fall, and its first doctoral program – in education – in fall 2007,
Kamig said.

“1 think one of the positives,” said Johnnie Ann Ralph, university librarian and dean of the Pfau Library, “is that it remains a very nice physical setting while we’ve grown. We haven’t succumbed to concrete.”

She added, “We still have grass and trees and mountains.”

Ralph has worked for the university since 1971.

Challenges remain, however, for a university that reflects its region in multiple ways. Cal
State San Bernardino has a service area of more than 27,000 square miles, but high-school
graduates in the area are much less likely to be college eligible than students elsewhere in the state.

As it is, Karnig said, 70 percent of the school’s students are in the first generation of their
families to attend college.

As it faces challenges of the future, however, city leaders and others say Cal State San
Bernardino already has huge benefits for its community – educational, cultural and economical.

Mayor Pat Morris said, “It is the single most important institution in this city. By far.”

James Watson of the Seal Beach-based Watson & Associates is undertaking development projects throughout the city, one of the most substantial at a site across from Cal State San Bernardino.

The project, called The Promenade at University Park, is a 16.2-acre mixed-use development. It is to include a $3 million to $4 million building for the university, as well as a corporate condo for Watson & Associates.

Watson had an simple explanation for his excitement about developing the site.

“What could be more wonderful” he asked, “than to build a retail and residential project right across from a great university?”