This article by Business Editor Jim Steinberg traces the close association between J. R. Watson & Associates Development Corporation, CSUSB, and the San Bernardino community and how each has benefited from the relationship. Discover what the future holds for this mutually beneficial partnership.

“We are going to be active in this city for many years to come.” 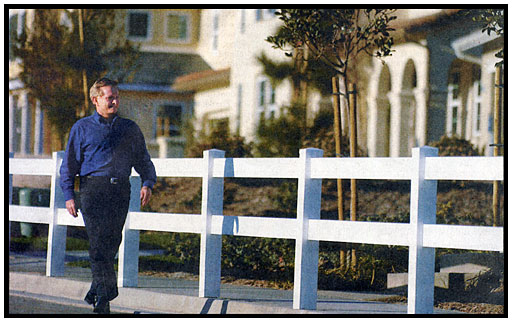 Real-estate developer James R. Watson plays by his own rule book one where there’s more to doing business than the bottom line.

“I’m not in the WalMart business where you have to watch every penny. I have to worry about what we are going to end up with. How are we going to make the whole concept work,” Watson said.

The Seal Beach developer was drawn to San Bernardino about four years ago.

“Jim was relentless,” Watson said. “He had been after me for more than a year.”

Since then, Watson has been very, very busy.

His University Park project, near Cal State San Bernardino, has more than 161 homes in various stages of construction. And he’s planning more in the area, including 54 priced at more than $800,000.

“Some will sell for more than $1 million,” he said.

Then there’s the 16.2acre, $70 million plus The Promenade at University Park.

The mixed-use residential-retail development will include a $3 million to $4 million building for Cal State San Bernardino, as well as a corporate condo for Watson & Associates.

Watson plans up to 200 town homes on about nine acres the San Bernardino Economic Development Agency is beginning to assemble for a redevelopment project north of Carousel Mall.

And he’s looking at some mixeduse, office, industrial and housing opportunities near San Bernardino International Airport.

Funk has been an admirer of Watson’s work for well more than two decades.

As executive director of redevelopment for Huntington Park in the early 1980s, Funk brought Watson to that troubled city to help turn it around.

the time, Huntington Park was listed as one of the 25 most distressed communities in the nation, Funk said.

Watson “wasn’t the biggest builder to come to Huntington Park,” Funk said, “but he was one of the most significant in terms of innovation.”

Funk’s agenda for drawing Watson to San Bernardino was the 117 acre parcel near Cal State San Bernardino that had been considered by Arrowhead Credit Union as a headquarters site.

When Arrowhead rejected the location, Funk wanted to ensure that the choice piece of real estate was put to good use.

Watson “doesn’t put much stock in market studies,” Funk said. “For him, it’s more in intellect and gut reaction …. He has a way of using his creativity to make sure that everybody prospers.”

After seeing the land, Watson fell in love with it.

Watson said that as he started going through the development process, he met many city officials and the university’s president, Al Karnig.

“What a wonderful group of people… what a great opportunity,” Watson said.

Original plans for The Promenade site called for it to be a research office park. There were no takers.

Watson said he thought the land would be vacant for a long, long time unless the research-park concept was jettisoned. But a mixed-use project with retail and residential would turn quickly.

And it would mean more profit for Watson and his partners.

In a classic case of Watson logic, the developer thought he could peel off some of that extra money for Cal State San Bernardino.

That’s why The Promenade includes an 11,525 square foot building that will belong to the university.

Karnig said the building could be used to house alumni, fundraising and public relations functions. The second floor would be used for luncheons, receptions, small conferences and other events.

The whole project will “add a richness and texture to the campus” in large part due to the retailers and restaurants that will be located nearby in The Promenade, Karnig said.

Watson has developed a keen interest in the university.

Two houses in the University Park housing subdivision will be made available for university use over a two year period.

Karnig said they might be used on a temporary basis when a new faculty member comes into town and starts looking for a place to live.

Watson & Associates partners are also putting up $300,000 for a public arts program at the university, allowing students to work on projects that will be displayed in parks and other public places, said Sant Khalsa, who chairs the university’s art department.

And Watson is heading a drive to raise $4 million for furnishings for a new College of Education building.

“He is very thoughtful, collaborative, insightful, bright, well-intentioned and good for the city,” Karnig said.

Next door to the university building in The Promenade will be the $1 million plus Watson & Associates corporate condo, where Watson and other company executives would stay on an as needed basis.

“We are going to be active in this city for many years to come,” Watson said. 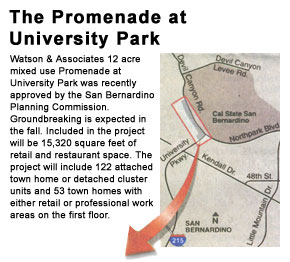