“I basically have no
interest in doing a project
I don’t find interesting and
creative. I’m past the point
of having to make a living.”
JIM WATSON

About 70 Homes planned near the foothills.

Two phases to total more than 60 houses in the verdamont area.

A multi-block effort of more than 100 townhomes proposed for downtown. 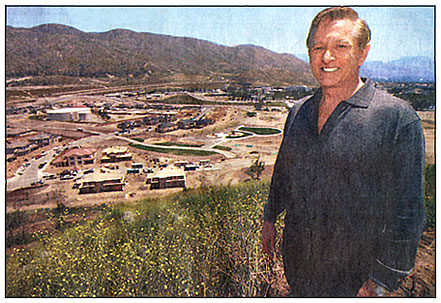 Jim Watson, President of Watson & Associates of Seal Beach, is developing University Park, in the background, and has several projects going in the San Bernardino area. He is also heading a fundraising effort for a College of Education building at Cal State San Bernardino.

It took Jim Watson about 45 seconds to decide he would snap up 122 acres of surplus city land in San Bernardino and cover it with homes.

He visited four years ago at the invitation of a city official who knew Watson, president of Watson & Associates, as decisive. The property, made difficult by its uneven terrain, sits across from Cal State San Bernardino and today is populated by just-finished homes and crews building more.

As he moves ahead with University Park, Watson is planning more than $300 million in San Bernardino residential projects at a time when city leaders are pushing economic revitalization, in part, through luring high-income home buyers and turning renters into homeowners.

The development includes four parks, walking trails and about 500 trees planted last year. Watson & Associates plans a three-story building it will donate to the university. And the company expects to put up a corporate condominium, where Watson wants to host regular lectures featuring prominent writers, artists and scientists.

His development to-do list also includes live-work spaces and new houses that could be the city’s first to sell for $1 million, plus hundreds hundreds of homes Watson said he wanted to build downtown.

“I basically have no interest in doing a project I don’t find interesting and creative. I’m past the point of having to make a living, thankfully,” he said.
California Roots

Watson, 66, grew up in Compton, raised by his mother after his father died when Watson was 6 years old. Watson said he launched his development company in 1972, 10 years after graduating from San Jose State.

His first projects consisted mostly of small shopping centers. By the late 1990s, Watson & Associates devoted almost all its efforts to housing or projects that mixed homes with retail or other types of business.

Today, Watson lives in Seal Beach with wife, Judy, 47. The couple travels regularly, circling the globe on trips that include multiple stops. Their most recent international tour: Tokyo; Florence, Italy; and Dublin, Ireland– in that order.

“We pull out the map and say, ‘What sounds interesting?’ ” said Judy Watson, who met her husband 23 years ago at Huntington Park City Hall, where she worked at the time.

Still, the developer gets to San Bernardino usually once a week.

To make the long drive productive, Watson employs a driver so he can take phone calls and do other work.

Watson was lured here by James Funk, who retired as development-services director last month. The two, who’ve known each other 25 years, also worked together in Huntington Park, where Watson developed more than a dozen projects.

Rather than max out the number of homes he can fit on a property, Watson brings a holistic approach to development, Funk said.

Watson primarily works as a master developer, which means he buys and subdivides a property, installs roads and pipes and sidewalks and parks and then sells pieces of the land to builders.

“He doesn’t want to be a giant developer; he’s interested in special niches and special opportunities,” Funk said. “He likes areas within the community others might have shied away from.”

Watson’s San Bernardino projects include Valley View Estates, a foothill development of about 70 houses, plus a two-part Verdemont project to total more than 60 houses.

His first downtown effort proposes a multiblock project along Fifth Street, where he plans more than 100 town homes. The City Council decided earlier this year to sell $25 million in bonds to purchase land for the town homes.

Another project, in Needles, would consist of houses and condominiums on 208 acres. But the project hit a snag last year when Watson was charged with obstructing a waterway after starting to clear brush. Deputy District Attorney David Varman said Watson didn’t give notification he was starting the work. Watson said the city told him no permit was needed.

“I think he measures up with the best,” Leonard said.

Michael Vairin, chief operating officer of Young Homes, said Watson brings the level of quality, such as rock walls where some might put stucco, you’d see in Orange County. Vairin previously worked at Richmond American Homes, which is building the first houses at University Park.

“A different builder might have said, ‘This is San Bernardino, you don’t have to build that nice stuff.’ But Jim really had a vision of what he wanted it to look like,” Vairin said.
Cal State Benefactor

Watson became acquainted with Cal State after seeking input on his University Park plans. His first financial pledge came months later: $50,000 to design a program to boost local school test scores — a concern that surfaced after he began marketing University Park. Cal State officials came back with a literacy program proposal. Watson liked the idea so much he has given $200,000 to the Literacy Center.

Said university President Albert Karnig: “I don’t know that I’ve ever struck up as good of friend to the university in such a short time.”

Now Watson and his wife are leading an effort called Tools for Education to raise $4 million to outfit a new College of Education building at Cal State San Bernardino.

So far, they’ve raised more than $1.7 million. Watson also has pledged to give $300,000 to the university’s Art Department to make pieces for display around the city and another $200,000 to the city to help landscape roads near the Valley View Estates development.

On a recent morning, Watson took his fundraising efforts straight to the source — a weekday gathering of about 40 education professors. He told them that putting their money into Tools for Education will increase its chances of getting grants.

“There are few professions that will modify civilization for the better or worse than education,” he told the professors, who gave him a standing ovation when he finished.

The city’s first $1 million tract-style homes could very well be part of Watson’s University Park, called The Heights at University Park, which sits 200 feet above the first houses now being completed and selling for more than $500,000. GFR Enterprises also is developing homes in the Verdemont area expected to sell for $1 million, Funk said.

Watson thinks such houses will give residents something they’ll no longer have to look for elsewhere in the Inland Empire. The big-ticket houses should be for sale in 2007, he said.

“What I didn’t realize when I got here is there’s a large number of people who are affluent who would like to continue to live here or come back,” he said.

At his age, Watson said he envisioned working fewer hours than the 50 or more he typically puts in every week. He thinks 20 hours would be closer to a schedule he’d prefer.

“But I have no desire to retire, no interest in retiring, ever,” he said.

Judy Watson, who recently began working at Watson & Associates, said she knows her husband will likely never be a retiree.