That’s how the university’s College of Extended Learning is advertising its new location in the city Economic Development Agency building at 201 N. E St.

“We’ll be offering the MBA for Executives (graduate degree program) … at the Cal State Downtown Center,” said Jeet Joshee, dean of the college. “It’s one of the major programs for the working professionals needing to complete their master’s.”

Classes for the 21-month program start this month and will be held every other Wednesday night for four hours and all day every other Saturday.

Classrooms are being put up at the building, which also houses offices for Rep. Joe Baca, D-Rialto; Sen. Barbara Boxer, D-Calif., and the San Bernardino Convention and Visitors Bureau.

Although the main use of the classrooms will be for the MBA program and classes to obtain a human-resources certificate through the College of Extended Learning, the Cal State San Bernardino Downtown Center will also have information about other university programs and will host a Lunch and Learn series.

The goal of that is that employees of the county and city and public and private business right in the area would come during their lunchtime,” Joshee said.

Mayor Pat Morris, who regularly brainstorms with Cal State San Bernardino President Albert K. Karnig on partnerships with the university, said it’s all part of the ongoing attempt to improve the city’s image and appeal.

“Selling the city includes having a quality of life. It includes cultural activities,” he said.

Part of that strategy was helped recently by a donation from Watson & Associates to fund 10 pieces of public art. 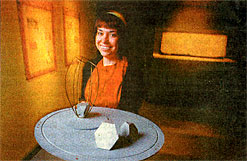 Artist Elizabet Newton of Fontana designed this public art piece called “Serinity” which is to be built across from Cal State San Bernardino. Newton, 24 is shown at the Robert V. Fullerton Art Museum on campus last month.

The first piece of artwork, titled “Serenity,” has been designed and will be constructed across from the university at Northpark Boulevard and University Avenue by September.

The artist, 24-year-old Elizabeth Newton of Fontana, said she was inspired to create a sculpture promoting peace and tranquility.

“Serenity” will have bronze bars reaching up 10 feet toward the sky, towering above three stainless-steel geometric forms from which water will trickle.

“I wanted to create a place for people to come and refocus,” Newton said.

Eri F. Yasuhara, dean of the College of Arts and Letters, said Newton’s artwork had some heavy competition in the selection process to become the first in the city’s public-art series. Two juries chose the winner.

“What won the group over, I think in part, was the idea of this peaceful place at that busy intersection,” Yasuhara said. “Art is critical in the development or redevelopment of a city. I take it very seriously – this university’s commitment to partner with the community to promote arts awareness.”

James Watson of Watson & Associates has stepped forward as a partner in arts development, and Morris hopes to collaborate with other businesses in the private sector as well as the school district.

“Without wanting to overcommit them, they are a willing partner at the table,” the mayor’s chief of staff said. “There has been a diminishment in funding to make arts (available) in schools. To help augment programs in their own school is a critical benefit to them.”

“I have long believed that great cities have great public art,” he said. “And President Karnig shares that philosophy.”