J. R. Watson & Associates in association with Hughes Investments of Newport Beach are one step closer to completion of a Washington-Idaho border master planned resort development. 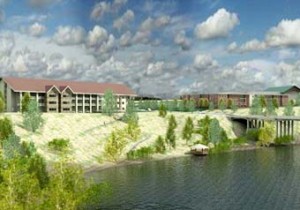 This artist’s rendering shows RiverView, a proposed hotel development at the Washington-Idaho border near Cabela’s. Courtesy of Hughes Investments.

The developers behind RiverView, a proposed cluster of hotels and restaurants on the Washington-Idaho border near the Cabela’s sporting goods store, have taken the next step toward building the $25 million resort.

Hughes Investments, of Newport Beach, Calif., and Watson & Associates, of Seal Beach, Calif., have submitted a conditional use permit application for the “master planned resort” to the Spokane County Building and Planning Department.

Alan Johnson, Hughes’ senior vice president of development, said this week he hopes to “be under construction this time next year.”

Hughes owns about 10 acres of the site, and Watson owns about 7 acres.
The developers envision a resort for Cabela’s customers and people drawn to recreation along the Spokane River. The proposal shows three hotels, with about 350 rooms total, on the north side of the river and just west of Cabela’s, which sits across the state line in Post Falls. The conceptual site plan also shows a restaurant, a fast-food outlet, a convenience store/gas station, and an espresso stand.

Below the three hotels, private trails would lead guests to viewpoints and “seasonal gazebos” along the river. Amenities would include fly-fishing areas and boat launches for rafts, canoes and kayaks.

The riverbank there “has been under-utilized and is currently in a dilapidated state,” the developers wrote in a project description for the county. “Improvements, such as riverbank restoration, private trails and scenic viewing platforms, will revitalize the appearance of this important gateway to Spokane County.”

Under Spokane County’s comprehensive plan, a “master planned resort” designation requires a conditional-use permit allowing development outside designated urban growth areas. The permit request is under initial review, county senior planner Tammy Jones said, and a public hearing on it could be scheduled as early as this fall.

Meanwhile, the county is preparing to rebuild the old I-90 bridge on East Appleway Avenue across the Spokane River. The 70-year-old bridge is a key link to the Stateline community and to the RiverView-Cabela’s development area. It’s used by about 9,000 vehicles a day and has a weight restriction of 10,000 pounds, which bars truck traffic.

The county is in the design and permitting phase and plans to seek bids on the bridge project next February, said Neil Carroll, the county’s bridge engineer. The project cost is estimated at $11.2 million, with the Federal Highway Administration committed to paying 80 percent of that and the county road fund covering the balance, Carroll said.

Construction on the new two-lane bridge is expected to begin in June 2010. Appleway Avenue will be closed for about 18 months for the work. Cars and pickups will be detoured to Harvard Road and East Wellesley Avenue in Washington, and West Seltice Way and Pleasant View Road in Idaho. Trucks will be routed to East Trent Avenue during construction.

This website uses cookies to improve your experience while you navigate through the website. Out of these cookies, the cookies that are categorized as necessary are stored on your browser as they are essential for the working of basic functionalities of the website. We also use third-party cookies that help us analyze and understand how you use this website. These cookies will be stored in your browser only with your consent. You also have the option to opt-out of these cookies. But opting out of some of these cookies may have an effect on your browsing experience.
Necessary Always Enabled
Necessary cookies are absolutely essential for the website to function properly. This category only includes cookies that ensures basic functionalities and security features of the website. These cookies do not store any personal information.
Non-necessary
Any cookies that may not be particularly necessary for the website to function and is used specifically to collect user personal data via analytics, ads, other embedded contents are termed as non-necessary cookies. It is mandatory to procure user consent prior to running these cookies on your website.
SAVE & ACCEPT