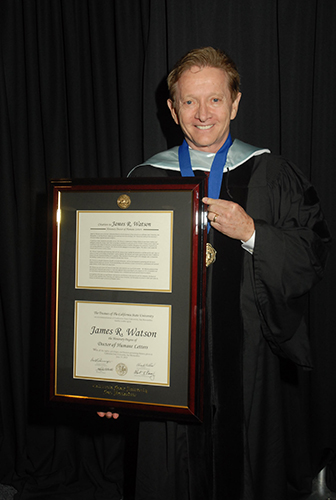 James R. Watson is one of the most influential friends in the development of key initiatives at California State University, San Bernardino. A Seal Beach-based commercial and residential real estate developer, Mr. Watson has embraced the university’s role of providing a regional educated workforce.

A significant donor, fundraiser and public servant, Mr. Watson is committed to helping children become better students and ultimately productive citizens. Since 2003, he has been a contributor to and advocate for CSUSB’s Literacy Center, which was established in the College of Education to provide tutorial assistance to students throughout the community. Inspired by his own reading difficulties as a youngster, Mr. Watson led the campaign to secure donor support. The center is now named the Watson and Associates Literacy Center.

Mr. Watson’s leadership and fundraising skill with the Literacy Center sparked the university to ask him and his wife, Judy, to serve as co-chairs of the College of Education’s capital campaign. The Watsons were tireless, generating more than $3 million to enhance the new Education building and its programs. They contributed the primary gift to the campaign, and, in recognition, the building’s student services center is named for Jim and Judy Watson.

Mr. Watson is a dynamic proponent of public art in San Bernardino, and was instrumental in partnering with the city to display CSUSB student art citywide. He provided funding to the university’s Coyote Conservatory, a performance arts outreach project led by CSUSB’s theatre arts department.

Mr. Watson was only 6 years old when his father died, after which he was raised by his mother. Mr. Watson graduated from San José State University and worked as a real estate appraiser before launching his own company in 1972. As president and CEO of Watson and Associates, he developed shopping centers, residential and master-planned mixed-use projects.