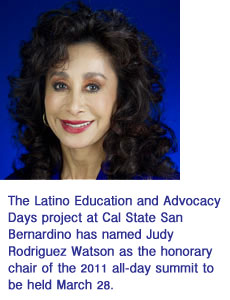 SAN BERNARDINO, Calif. – The Latino Education and Advocacy Days project at Cal State San Bernardino has named Judy Rodriguez Watson as the honorary chair of the 2011 all-day summit to be held Monday, March 28.

The event will take place on campus in the Santos Manuel Student Union Events Center.

Affectionately dubbed the “madrina de honor,” or godmother, of this year’s second annual conference, Rodriguez Watson is co-president of the Seal Beach-based Watson and Associates Development Corp. and an ardent supporter of education.

Along with her husband James Watson, Rodriguez Watson co-chaired Cal State San Bernardino’s “Tools for Education” fundraising campaign in 2006. The effort raised more than $3 million to equip the university’s College of Education Building with technology labs, clinics, literacy and assessment centers that serve the students and the Inland Empire.

The Watsons also are committed to helping children become better students and ultimately productive citizens. Since 2003, they have contributed to and advocated for CSUSB’s Literacy Center, which was established in the College of Education to provide tutorial assistance to students throughout the community. The center is now named the Watson and Associates Literacy Center.

In 2010, CSUSB named its four-year-old public art program the Judy Rodriguez Watson Public Art Project in honor of her passion and financial support for placing art in open spaces at CSUSB, the surrounding community and around the city of San Bernardino.

“I cannot express enough how this honor fills me with a tremendous sense of joy and appreciation especially with its connection to the Latino community,” said Rodriguez Watson.

Passionate about education, she attributes her zeal and dedication to Latino education to her father, Raymundo Rodriguez, who instilled in her an appreciation for the arts, encouraged her to travel and to be successful in whatever endeavor she chose, without forgetting where she came from.

“There is a need for more Latinos/Latinas who are positive and motivating role models and who ‘think outside the box’ in all areas – the arts, education, parenting, workforce, politics and more,” she added.

Rodriguez Watson was born and raised in Los Angeles, but her connection to the Latino culture was nurtured early in her childhood.

Her father, who was born in Veracruz, Mexico, would take her mother, three sisters and her on a two-week visit each summer to cities in Mexico such as Acapulco, La Capital, Guadalajara, Cuernavaca, and of course, his beloved Veracruz.

“Those two-week explorations were the highlight of my summers,” says Rodriguez Watson. “They instilled in me a pride in my heritage and a connection to my ancestry.”

Although her family’s financial means were modest, she reminisced that they had a lot of love and encouragement from their parents and will never forget the pride they had in their children.

Rodriguez Watson remembers that her father worked three jobs when she and her sisters were young, but that Sunday mornings were reserved for la familia and they celebrated with a huge Latino breakfast.

“My father’s dynamics and drive were the early seeds of my lifelong work ethic and compassion for those who have had less opportunity,” she says. “By watching him, it ingrained in me the importance of hard work, perseverance and no-nonsense manner.”

Rodriguez Watson, who has a bachelor’s in psychology and social behavior from University of California, Irvine, said the road to a college degree was not easy due to a learning disability. She wasn’t diagnosed with dyslexia until she was an adult, because learning disability assessments were unheard of during her elementary school days. She said that being dyslexic caused her much consternation, as reading was a very slow process.

“When one is dyslexic, one must have a certain amount of tenacity,” she said. “Observing my father’s drive inspired me to push myself to the limits and helped craft my infinite persistence.”

“It is our early childhood experiences, culture, upbringing and afflictions that makes or breaks a person.”

For more information about Cal State San Bernardino, contact the university’s Office of Public Affairs at (909) 537-5007 and visit news.csusb.edu.