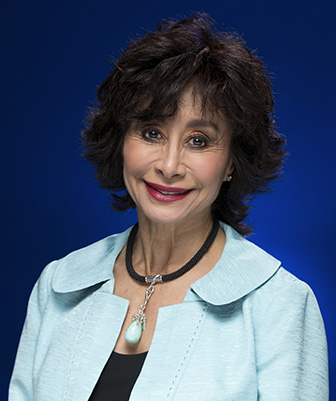 SAN BERNARDINO, Calif. – Cal State San Bernardino announced the naming of its four-year-old Public Art Project in honor of one of the university’s most ardent supporters of arts and education.

Together with her husband, James Watson, chief executive officer of Watson and Associates, Judy Rodriguez Watson pledged a gift of $300,000 to Cal State San Bernardino in October 2006 for art students to create public art for display at designated sites at CSUSB, the surrounding community and around the city of San Bernardino.

Francoise Aylmer, former vice president of university advancement at CSUSB, said that initially Rodriguez Watson hesitated to name the project after herself, as she was not seeking recognition. “However, Judy accepted it with the hope to incite other young Latina women to follow their passion and achieve success.”

“I was stunned and very humbled when I was asked if I would accept naming the project after me,” said Rodriguez Watson. “I feel very proud to have my Latino surname (Rodriguez) included in the title of the project. Perhaps someday a high school student might see the Latino name (on the project) and be inspired to develop her passion for art.”

Rodriguez Watson said her own passion for art came as a teenager.

“When I was 14 years old, I had the unexpected opportunity to visit five countries in Europe, which totally opened my eyes to a whole other world of cultural arts,” said Rodriguez Watson. “It was such a pivotal moment in my life that spurred me to further my education and develop my love of art.”

The project is administered by professor and chair of CSUSB’s art department, Sant Khalsa, from the university’s College of Arts and Letters.

“I am very pleased to see Judy gain recognition for her contributions by naming the project the Judy Rodriguez Watson Public Art Project in her honor,” said Khalsa. “The art department is sincerely grateful for Judy Watson’s passion and ongoing commitment to the visual arts, support for art students, the university, and the city of San Bernardino.

“Through the Watsons’ generous gift, the art department initiated a public art course, in which students and faculty have already created artworks for public places in the city of San Bernardino,” said Khalsa.

Taught by CSUSB art professor Richard Johnston, a renowned sculptor and creator of art for public places, the course teaches the study and practice of public art, its history, theory, conceptualization and production.

The Art Stop project was one of the first to be completed and installed in downtown San Bernardino. At the request of San Bernardino Mayor Patrick Morris, CSUSB art students painted and designed 12, 24-inch concrete spheres.

Among the other planned projects in San Bernardino is a monument in tribute to the city’s 200th anniversary celebration at Chancellor’s Park located at the corner of Kendall Drive and Campus Parkway. Installation is scheduled to be completed later this year.

The Watsons’ philanthropic efforts are not limited to the arts. The couple co-chaired the “Tools for Education” fundraising campaign in 2006 for the construction of the new College of Education building, raising more than $3 million.

Through the generous contributions of the Watsons, the university’s College of Education named a new literacy center the Watson and Associates Literacy Center.