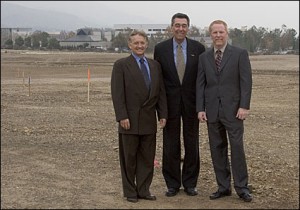 December will mark the preview opening of Regency at University Park, a collection of 90 new luxury detached homes on quarter-acre lots adjacent to California State University San Bernardino, according to the Corona-based Inland Empire division of Richmond American Homes. The Regency property is located northwest of the intersection of University Parkway and Northpark Boulevard.

Having the University for a neighbor combined with homesites of this caliber plus open space, a trail network, both an active park and a passive park and even a local retail center makes Regency at University Park an unparalleled new home buying opportunity,” said Michael D. Vairin, Richmond American Homes president.

Vairin added that the single-and two-story residences will offer four to seven bedrooms, two and one half to four baths, separate formal and informal entertainment “zones”, super family rooms, master bedroom retreats, bonus rooms, home office options and either three- or four-car garages. Square footage for the new homes will range from approximately 2,799 to 3,996. The architectural style palette for 35-acre Regency will comprise Traditional, Spanish Colonial and Cottage themes.

While pricing has not been determined at this time, Vairin noted that the company expects the initial starting prices to be in the mid to high 400,000s. He added that future resident/buyers will enjoy the fact that there will be no homeowner association or Mello Roos fees.

The overall 117-acre, 150-home planned community of University Park is a development by Watson & Associates of Seal Beach. Founded by president and chief executive officer James R. Watson in 1972, Watson has a long tradition of commercial, retail and residential development, primarily throughout California, but also active in Washington state and Idaho.

“The 80-foot-wide residential lot profile in University Park is a distinct advantage because the homesites here are anywhere from 40% to 100% larger than typical competitive developments in the surrounding area,” said Watson. “Additionally, the remarkable appeal of the community will be enhanced because roughly 26% or over 30 acres of the property has been dedicated to two parks as well as jogging and biking trails along with ample natural open space in a protected valley environment, not to mention the convenience of a four-acre retail center offering 30,000 square feet of quality shopping assets for University Park residents and the San Bernardino community at large.”

Dr. Albert Karnig, president of Cal State University San Bernardino, commented on the reaction the new community is causing on campus. “The entire university community is enthusiastic about the University Park development,” he said. “The community will benefit enormously from such attractive housing close to campus and the provision of small shops across from the university.”

Richmond American is currently directing all prospective home buyers to call 800-852-9714 or visit www.RichmondAmerican.com now for pre-sales update information or to join the Regency buyer interest list. While Regency’s onsite sales center is not open at this time, the property is easily reached by exiting Interstate 215 at University Parkway and proceeding northeast to Northpark Boulevard.

Award-winning Richmond American Homes is one of the nation’s top ten largest home builders and a wholly-owned subsidiary of M.D.C. Holdings, Inc. a New York Stock Exchange Company traded under the symbol MDC. The company is the largest homebuilder in Colorado and is among the top-five homebuilders in Northern Virginia, Phoenix, Tucson and Las Vegas. A premier homebuilder in suburban Maryland, northern California and southern California, MDC also has recently entered the Salt Lake City and Dallas/Fort Worth markets.